Wednesday, March 16, via the Facebook group Broken Top Bottle Shop Friends, I learned that two of the original four partners in BTBS will be shortly selling their share to the other two.

Diana Fischetti and Andy Polanchek are moving on and leaving the beloved bottle shop and restaurant in the capable hands of Jason and Jennifer Powell. We love all four of these folks and this is kind of bittersweet for us.

We first went to BTBS in May 2012 just three plus months after they opened when we were here for Sara’s interview. We moved just up the College Way hill from them in August 2012 and commenced to being regulars. Let me just put it this way: On Untappd I have 455 checkins at BTBS. Our good friend Ryan has 302 and my lovely wife (who started using Untappd way after me) has 116. We are the top three. [At our own home location I have 714, she has 142, and Ryan has 100.]

We used to live at the other end of the street which was just over 1 mile, with a fairly significant hill. The way down was easy. One earned their beer and food with the walk back home. Almost entirely uphill. We have since moved somewhat across town but nowhere else is close for either of us on checkins. The next two would be Platypus Pub and Deschutes Bend Public House, which both around 160 checkins for me [versus 455].

This is our place. I wrote about them in the Oregon Beer Growler. [PDF: November, 2013, p. 18] I talk and write about them frequently. I even have a TextExpander shortcut for “Broken Top Bottle Shop & Ale Café.” Most of my browsers, at home or work, “know” that “b” typed in the address bar means “http://btbsbend.com/“ so I can check either or both of the tap list and specials menu.

I stopped by there Thursday on the way home from work to do some business with a local brewer friend. Got myself a converted half barrel to use as a mash tun and boil kettle. Stoked! But I saw both Jason and Jennifer (separately) and they are stoked to move on to this new phase. “Team Powell” is on the way and looking forward to maintaining their place and the community, along with bringing us new things. We are excited.

Friday evening was also the “Sail Away Party” for Andy and Diana during the Stone tasting. We went down for dinner and beers after I closed up the Barber Library at 5 pm. Thankfully we got a few minutes to chat with both of them. They aren’t leaving us right away and have some irons in the fire, so to speak, so we’ll be looking forward to seeing where this next phase goes for all of them and the shop.

We want to extend our heartfelt good wishes to Diana and Andy in whatever comes next in their lives. Cheers, friends! 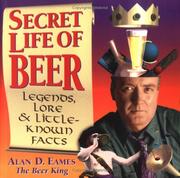 Secret Life of Beer: Legends, Lore & Little-Known FactsAlan D. Eames; Storey Publishing, LLC 1995WorldCat•LibraryThing•Google Books•BookFinder
This book is the beer equivalent of The Uncle John’s Bathroom Reader series. (Then again, it has been 20 years since I’ve seen an Uncle John’s so I may be denigrating them by saying that.) The book is a compendium of poetry, songs, literary quotes, legends and excerpts from human history.

Here’s my gripe. The blurb on the back of the book states that “Alan D. Eames is a cultural anthropologist, …. He is a founding director of the American Museum of Brewing History & Fine Arts …” (back cover). But there isn’t a single source fully credited in the book.

OK, I am more than willing to take “William Shakespeare, Othello, Act I;” or, “Thomas Hardy, Channel Firing, 1914;” and even, “Chaucer, Canterbury Tales” as complete enough for the purposes of this kind of work. But. Neither “A.A. Milne (1882-1956),” nor “Henry Miller (1891-1980),” nor especially “Samuel Johnson,” nor “Christopher Marlowe” are acceptable citations. It is not just the pop culture section that is guilty of incomplete citations. ‘Saintly Suds’ gives us things like “Saint Hildegard (A.D. 1098-1179) Benedictine Nun” and “Saint Arnoldus” and “”Sir William Ashbless.” So not only are the citations lacking in rigor, but my old gripe about inconsistency is present. Well, if she is “Saint” Hildegard then I am pretty sure it is A.D. (or C.E.). But when did Arnoldus and Ashbless live? And, more importantly, from what sources does this information come?

P. 182 and a portion of p. 183 illustrating my point about the weakness of source citations.

Maybe it is all my years hanging out in higher ed but I expect more in the way of proper annotation by someone calling themselves a cultural anthropologist. So who is Alan D. Eames?

Well, a quick Google search shows us the question should be “Who was Alan D. Eames?” Obituaries in the New York Times, the Guardian, Realbeer.com, and elsewhere tell us that he was born April 16, 1947 and died Feb. 10, 2007. A couple of pages into the Google results is his obit from the local paper, the Brattleboro Reformer.

From his obits we learn that:

Most of the rest of the Google results are for places to buy his books or learn about them, or other “media” ripping off each other, and the NYT or Guardian, for obits. Although, one of the early results is for this article, which is a shortened version of the book under review:

I searched JSTOR for anything authored by him, seeing as he labelled himself a cultural anthropologist and it has a good collection of anthropology journals, but found nothing.

Searching the Hospitality, Tourism and Leisure database via COCC I found the following:

The first is a short interview and the other two are regarding an Amazonian expedition that he went on to discover beermaking techniques.

I did track down several article by Solomon Katz, mentioned above, who does maintain that cereal was domesticated for beer instead of for bread, but could find no mention of Eames or any contribution by him to Katz’s theories.

So, amongst many actual accomplishments—some of which are under dispute—he seems to have been quite the huckster. Part of me shies away from such a judgment without knowing more but based on one last obit I want to share, written by a friend of Eames, “he played that image [the Indiana Jones of Beer] to the hilt, too, since as he once freely admitted to me, he was also something of the P.T. Barnum of beer: “I’m in every sense a promoter.”” The P.T. Barnum of beer was exactly what I was going to call him.

In regards to beer quotes, here is a good post on more deserving beer quotes:

And here is  link to one of the Katz articles I found:

With all of this said, it sounds as if Alan Eames was an adventurous, colorful, and often controversial character. I may question some of his ‘scholarship’ but I would love to have drank some beer with him. He seems like he was a jolly, avuncular chap, who just like your favorite uncle could tell some stories you might question just a bit, nor all of which you would believe, but you would still love to hang out with.

As for the book, there is a lot of interesting stuff in it. The question remains as to how much of it you can take for fact. If you aren’t overly concerned with things like that, or simply have different standards for these kinds of things than I do, then I recommend it. If you will be bugged to no end by lack of proper source crediting then do skip it.

Visit me on Untappd Untappd Supporter

Member of the North American Guild of Beer Writers (NAGBW)